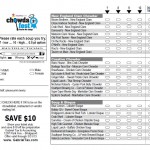 On Superbowl Sunday our BubbleScan solution was used at the Chowdafest 2013 held in Bridgeport, CT. This annual event is a fundraiser for the CT Food Bank.
The custom ballot was 8.5×7, which allowed the customer to print 2 forms on a US-LEGAL page.

Ballots were scanned using a Xerox DocuMate 3220 Document Scanner. Our BubbleScan OMR software then read the scanned images and dropped the data into a customized Excel spreadsheet. There data was tabulated.

The voters at Chowdafest tasted up to 30 soups divided into 3 categories. They assigned a score to each soup from 7 to 10 points and could assign an extra 1/2 point bonus.
To help easily detect suspicious ballots we added the validation logic to highlight all entries where fewer than 7 points or more than 10.5 points were given (the 0.5 point was a bonus only).
Such entries were highlighted in red in the spreadsheet. The (invalid) score was not show, instead the score was blank. This gave Chowdafest the option to review the score or to let the system automatically declare it invalid.

Jim Keenan, the brainchild behind Chowdafest and main organizer, had contacted us to put together a solution that would be much faster and more accurate than hand-counting.
Here is what he said after the event:
“… thanks for all your help with the BubbleScan stuff. … it worked great – big time saver.
We’ll be in touch again next year – just wanted to say thanks!”

Want to read about the actual event (not from a technical perspective):

About the Author: Joerg Weser